I've not been around for the past few days, mainly because my ministry is a bit crazy at the moment (I'm involved in full time youth ministry in a secondary school, so although it's a 8am-4.30pm job in theory, it isn't really). There's been lots of events happening this week, and between being ready for them and being around for Mr Muddle, there hasn't been much time to blog... so forgive my absence please!

As you might have read, whilst I'm a committed Christian, Mr Muddle isn't. I've been working full time in various ministries since I left school, and was very actively involved in my church before we married. Since we married, I have been very grateful for the advice of a very wise spiritual director. She advised me not to commit to any regular ministry outside of school. Her logic was simple: "You work for God all day. But what sort of witness are you giving to your husband if God takes you away from him all the time?"

I thank God regularly for her wise words. I will naturally offer to help everyone, and over-commit myself. She simply reminded me that God called me into my marriage, and that is my first ministry. God called me to my school too. I must prioritise them.

It's helpful to remember that when life is busy, that God has given me my priorities, and asks me to be faithful to them.
Posted by Mrs Muddle at 18:23 No comments:

Though the sorrow may last for the night...

...joy comes with the morning.

After spending a lot of yesterday feeling rotten, today has been the best day we have had in a LOOOOONG time... I know it doesn't mean all the problems are go, but I have something to hold onto next time the nighttime comes...

A Scripture of Hope

The LORD God is near to the broken-hearted, he helps those whose spirit is crushed. Though hardships without number beset the upright, the LORD God brings rescue from them all.

I have been praying this scripture with all my heart today. Some days, the sadness feels so much more than I can bear... but God is close to me in my broken-heartedness. 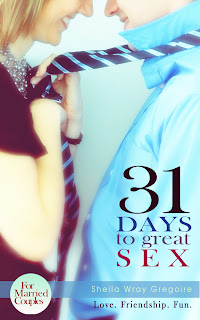 So today I downloaded Shelia's new book to my Kindle. If you're not a reader of "To Love, Honour and Vacuum", you should be. This book is entitled 31 Days to Great Sex.

As you'll may have read in my last post, I am the high desire spouse in this couple. I could happily have sex at least ever other day. My husband is not in that place, and if left to his own devices would happily have sex only once every 2-3 weeks... that's quite a big difference. I suspect he might have low testosterone levels, but right now, he refuses to see a doctor to rule that out.

I started reading the first few days to see how they unfold, so I can broach the subject of working through the book with my husband. I'm not sure I'm brave enough today, and I want to pray first that I find that right time to do so. I'm sure there's so much I could be doing to help improve our emotional intimacy, and I have high hopes that working through this book together will help.

So, please pray for me: for God's wisdom, that I know the right time and the right way to raise this with him, and for a docility in spirit that I would be willing to learn what both God and Mr Muddle need to teach me in the area of our marriage bed.
Posted by Mrs Muddle at 16:28 No comments:

I have finally been able to admit to myself that I am a high desire wife. When it comes to sex, Mr Muddle is left in the dust by how much (and how often) I want him... and that is hard. So many of the books I've read on marriage expect the wife to be the one who refuses sex, and the husband to be the one who is rejected. It's not that way in my marriage.

I'm very grateful to Shelia, at To Love, Honour and Vacuum, for recognising that, and through reading her blog, I've come across another blog written by a high desire wife which I find immensely helpful. She posted earlier this week something which really spoke to my heart: you can read her thoughts on Godly Seduction here... she talks about how, as Christians, seduction is SO much more than what we see in the movies.

Today, I also read a post fromThe Marriage Bed aimed at wives whose husbands don't want sex... Unfortunately, it seems to fall into the same old chiches (lingerie, walking around naked, etc)... how I wish those worked! How I wish it was that simple. I have never rejected my husband sexually. It is not a problem of my own doing, and that I need to train him out of habits he's learned through being rejected. The article seems to be written by a husband who has no problems getting aroused, and no problems with his desire levels. Whilst I appreciate that he's trying to help, it's almost like chucking salt into the wound

I'm afraid I shall ignore nearly everything I read on seduction at The Marriage Bed, and will instead take some time to pray through some of the suggestions from Spice and Love.

My prayer today is that everyone who is struggling in a marriage where sex isn't what we'd want... that God would show us new ways of seducing our spousing, and being together in mind, spirit and body.
Posted by Mrs Muddle at 19:40 No comments:

My Favourite Things: when he sings...

I thought I'd use my Saturday post to share some of my favourite things about my lovely Mr Muddle and married life.

I love hearing him sing, because I've never heard him do it when anyone else is already. It's always been a mark of how comfortable he is with me, and how much he trusts me. It's always a sign to me that he's happy, because he doesn't do it when he's not.

When we were engaged, I spent quite a lot of time online, talking with other brides-to-be on a wedding forum. We spent hours planning all the details together, discussing budgets and dresses, seating plans and invites, dreams, hopes and fears. We celebrated with each bride as her big day came round, and wished her all the best for her married life.

I was frequently questioned as to the wisdom of our marriage. The forum wasn't Christian, and so the overwhelming majority of brides were living with intended husbands, sleeping with them, lots had children already, and they couldn't fathom why I would marry someone I hadn't practiced living with, who I hadn't slept with yet. Again and again, I explained this was the norm within my faith, that this was the way all my peers were doing it, and this was what I felt was right. I'm sure many of them didn't understand my way of thinking.

Then there those who were marrying in Church and required by their priest/vicar/pastor to attend some sort of marriage prep course. The vast majority who were asked to do this thought it was some big joke, and a waste of time, and having lived together for so long, what was there possibly left to talk about? They went because they had to. We too were expected to attend marriage prep with my parish priest. We also booked ourselves onto an Engaged Encounter weekend, voluntarily. We talked, and planned, and questioned each other, and came out the other side more prepared for married life.

I don't want to sound smug, because that's not how I feel. I'm not writing this as a "well, we're still together two years later- how hard can it be?" I know every situation is different. But I'm overwhelmed by sadness.I don't know the situations these couples have found themselves in, but I heard yesterday another bride I'd planned with was now separated from her husband... less than 2 years on. She's far from the first- I've lost count, in fact.

Even within my Christian peers, I have attended seven weddings in the past 8 years. Two of those couples are now separated, with at least one of the spouses now with another partner. I'm overwhelmed by sadness.

In a world that focuses on the wedding, not the marriage, what can we do to help those preparing for marriage to really prepare for marriage, not just a wedding?

Other Places for Inspiration

This is the blog that inspired- and is still inspiring- me!